“Science is for Anyone and Everyone”

By Fiona KuzmackDecember 14, 2021No Comments

Dale Cummings presented with STEMCAP at Salt Lake Valley Youth Center in December – for our last two presentations of the semester!

Dale is a PhD candidate in Chemistry at the University of Utah. After being released from prison eight years ago, Dale began attending school – discovering and fostering an interest in science.

Dale began his presentation with his upbringing – starting with a story about how he was in a debilitating car accident when he was 17 years old. He was told he would not walk again and was given a number of opioids to deal with the pain and rehabilitation from his injuries. However, his first conviction was because of his loaning a car to a friend as a minor.

Dale gave a personal history of his convictions and how he had struggled to get out of the cycle of incarceration for more than a decade. When he was released on parole, Dale began pre-college classes at the local community college – despite being surrounded by many who told him he wasn’t smart enough for school. He made a decision while incarcerated that he wanted to get a doctorate, and made an effort to enter school as soon as possible. He remarked many times that his associate’s degree is the only degree that he hangs in his house – because it is that one that he is the proudest of completing.

Dale made sure to acknowledge that being incarcerated – and being subject to difficult life circumstances – made pursuing academic careers in science feel unrealistic. He admitted that he had felt that way and encouraged the students to talk about what they felt was available or possible to them. “I can see it on your faces, your eyes glazing over as I get to the science part,” he joked, but he insisted that science careers were much cooler and not as complicated as they were purported to be.

He did want to make space to thank and give credit to the supportive figures in his life – especially the professors who had given him a chance to be in their labs when others would not.

Dale strives to create a better understanding of the cycle of incarceration and has made an effort to talk about his experiences as much as possible with his community. With incarcerated populations, he hopes to show how achieving higher education is not only possible but potentially life-changing. 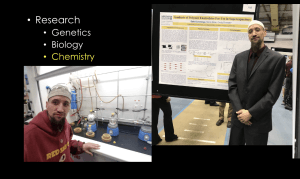 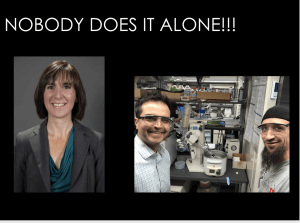